Just an innocent freshman at San Vallejo College, you are oblivious to the path that lays ahead of you. Growing up gets real when you learn about the unique cultures of the place you must call home. As loyalties form and tensions rise can you lead your fraternity to the crown and with it become the king on campus?

v0.3.1
Story:
* Sex scene was made optional, with your choice having a lasting impact on the story.
* Getting Evelyn’s number was made more difficult to enhance realism
*Slightly altered some of Lauren’s dialogue

General Improvements:
* Fixed a lot of spelling and grammatical errors (Special thanks to Storm for the detailed list)

v0.3
New content:
* Progressing the main story (Chloe, Lauren, Riley, Aubrey, Emily, Imre, Ryan, etc.)
* First real (non-dream) animated sex scene
* Optional side stories
* Second chances with girls you might have missed in the past
* Added date arc with Lauren (if you managed to get the date)

Bug Fixes:
* Resolved an issue that caused the game to crash due to variables not being defined
* Fixed missing / wrong images

v0.2.1
Gameplay:
* All keybindings for fights can now be changed to any key. (Q,W,R)
* Fights now have an option to automatically win when simulating

Gameplay:
* Real Life Mode: An optional mode that disables saving the game during choices to give you a more immersive and realistic experience where every choice matters.
* Meaningful choices: Lots of modular paths added. Many of the new choices will now permanently alter the game
* Key Character Trait Influence: Your KCT will now have a significant impact on how other character’s make decisions about you. Different characters prefer different KCTs (Loyal, Popular & Confident)
* Option to simulate fights so that you can watch the fight without having to play them

Bug Fixes:
* Resolved an issue that caused the game to crash due to variables not being defined 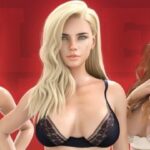