The best corruption game you will ever play, (development in-progress -_-) with the most beautiful and deeply-developed characters. Explore the lives of a high school girl, her caring mother, an aspiring actress, and a pair of twins. Each has their own in-depth story arc and unique developments. No more stupid boring sluts who all look alike. Only perfection. You can build trustful, loving relationships or you can corrupt them until they’ve become cock worshipping whores. It’s for you to decide.

v0.37
New Kate and Ashley’s content
The focus of this update was to build relationship between Kate and Sebastien and also show blooming Ashley’s interest to Kate.
Most importantly, I wanted to show Kate’s character. In the last events it wasn’t noticeable what she’s like, but now it is very vivid and it is the most interesting thing for me in Kate.
Major changes & additions:
There are 8 new events:
1) 4 new anime events with Kate and Sebastien.
2) 2 new bathroom events with Kate and Sebastien.
3) 1 new Kate and Ashley event.
4) 1 new event with Ashley and Sebastien.
+ Small interactions/story events and other stuff.
Minor changes:
I proofread the game after beta release, but there are probably a lot of mistakes still in the game. Send me them in #bug-reporting channel in discord.

v0.35
This update was entirely focused on new Jane’s content.
-8 new events with Jane(600pic) + new sessions and different dialogues. All of them you can find at the workplace at noon.

v0.30 and v0.25 Beta
Major changes & additions:
The focus of this update was to think through the core code features of the game(all interactions, all locations, all npc characters, all future events, just everything). Thanks to that saves will now work properly from update to update and most importantly I can make updates much faster.
Twins’ route:
– New location: Twins house. Twins’ house will be opened (just go through the Twins’ story) after you visit the doctor with Kate and Ashley. After that, you will be able to do various interactions in their house. However, most interactions don’t affect the story yet. In the future, I’ll add different stats that will determine Twins’ reactions to your actions. The more corrupted you will make them, the more slutty they will react to you. If you will do more nice choices then they will be more affectionate to you(you got the idea). This concept will work with every character. But it is still a work in progress.
– 2 new events with Kate.
– 1 new interaction with Kate at their house.
Lucy’s route was completely changed -_-
– New prologue with Lucy.
– Bathroom events.
– Night games events.
– Different interactions at home.
– Sebasiten’s house was changed completely.
Melanie/Tiffany route:
– 4 new events with Melanie.
– 1 new event with Melanie/Tiffany.
– 1 new event with Tiffany in the bathroom.
– 1 old deleted event (Melanie/Mark) was returned into the game.
– New start of Melanie’s story. (I added a lot of new scenes) Her house will be closed until the moment you will finish the events at your work with her. (Melanie’s story was changed for the sake of the new concept and gameplay. No old events were deleted, but all of them were changed.)
– 1 Melanie’s event was expanded, added new pictures and text.
Jane route:
-Jane route was fixed to be in one concept with the rest of the characters.
Other changes:
– A lot of old pictures were improved.

-A lot of new choices were added in the game.
-I did proofreading of the game, made possible by the saints who have big hearts to help me! HUGE AMOUNT of mistakes were fixed.(There are a lot of things are still needs to be done though)
Old saves have to work.

v0.16
150+ images and about 12000+ words in total.
-6 new events with Twins.
-3 new events with Jane.
-All Twins’ route was remade in code, Jane’s code was also slightly changed.
-Quality of pictures drastically improved.

“Old saves won’t work, because the code of Jane and Twins’ route was changed.
But I believe these routes deserve to be played anew. A lot of things have changed!”

v0.13
Major changes & additions:
100+ images and about 12000+ words in total:
-2 huge new events with Tiffany.
-2 additional new scenes with Melanie in the prologue.
-The prologue was a bit shortened.
-Some improvements in text and dialogues.
-I got help with proofreading of prologue. A LOT OF MISTAKES were fixed.
Minor changes:
-Additional text and pictures for event with Ashley and for the event with Kate.
-Additional pictures in Tiffany’s route.
Other stuff that I probably forgot to mention.

v0.1
A word from the developer.
I redid my game as I planned.
The update looks small in terms of the amount of adult content. But the benefits of all these changes are huge for the future development of the game.
Major changes & additions:
–New prologue(10 completely new scenes/events).
-Date with Jane after the 1-st dialogue.
-Jane’s dialogues were changed. Added new content at the end of the event in the changing room.
-The second event with K&A was updated. (additional new text and images)
-The code is rewritten in a lot of places. The order of events was changed.
-A lot of pictures were updated and remade. Some of the characters were slightly recreated.
-One saint helped me with proofreading. A LOT OF MISTAKES were fixed. Huge thanks to Onysko.
Minor changes:
-Small update of Derrick/Tiffany event.
-Added small additional content to Mark’s peeking scene.
Other stuff that I probably forgot to mention.

v0.09.1
Added the text forgotten to translate the last time and fixed some grammar and spelling mistakes.

v0.09
A word from the developer.
The game is at an early stage of development. It means that gameplay, its core features, plot details will most definitely be changed in the future. Right now I’m in the process of these changes and I’m redoing old content, with which I’m not satisfied anymore.
I almost redid my game as I planned, but there are still some things left to do.
So far this is only the first part of these changes. I had only put all old content together and made full prologue. Now it’s huge, but in the next update, I will reduce it, make it shorter, more exciting and will add 2-3 additional events with Tiffany. All this will finally allow me to get on track of creating new content fast, without looking back.
The update looks small in terms of the amount of content. But the benefits of all these changes are huge for the future development of the game.
Major changes & additions:
-Old content almost fully rewritten, shorten. I had put all old content together and made full prologue, which in my opinion makes the story only better. Still it is not the end result of the prologue.
-Added 3 new events with Lucy (all events are in the prologue).
-Added small additions to Tiffany’s events. With Blake and at Sebastian’s home.
-Jane’s dialogues was changed.
-I changed code in a couple of places.
Minor changes:
–New map. It will make map navigation easier. (test version, visual part will be changed in the future)
Other stuff that I probably forgot to mention.

v0.08
I continue working on redoing my game. For now, only content with Melanie and Tiffany was remade(it consists of a prologue and new gameplay which I’m only testing, it may change a little bit in the future). Next update will finish these changes.
You can find all the new content in Melanie’s house.
Major changes & additions:
-Added 6 new events with Melanie.
-Added 2 new events with Tiffany/ Melanie.
-Added new dialogues with Mark and Tiffany.
Minor changes:
-Add NTR block function at the beginning of the game.

v0.04 Public
Right now I’m working on redoing my game. Only content with Melanie and Tiffany was remade(it consists prologue and new gameplay which I’m only testing, it may change a little bit in future). Old content will be changed in future too.
You can find all new content in Twins’ café and Melanie’s house.
Major changes & additions:
-Added 3 new dialogues and new event with Twins.
-Added 2 new dialogues and 4 events with Melanie.
-Added about 22000 words.
-New gameplay(in progress). For now, only in Melanie’s route.
-New prologue as VN and some new different scenes for it. Melanie’s route was remade and rewritten completely. Park event and event in the bedroom were removed.
Melanie’s clothes were changed and all pictures with old clothes were rerendered.
-Added a couple of new additional pictures for old content.
Minor changes:
-Added rollback function. (you can enable it in the beginning of the game or at Sebastien’s kitchen)
-Improved text with Twins(it wasn’t fully fixed by a professional proofreader though).
-Quality of renders is improved. Maybe.
Other stuff that I probably forgot to mention.

v0.02.1
-Added content with Kate and Ashley to the public version.
-Added and change a lot of text in the game, plus some small bugs fixes and proofreading. 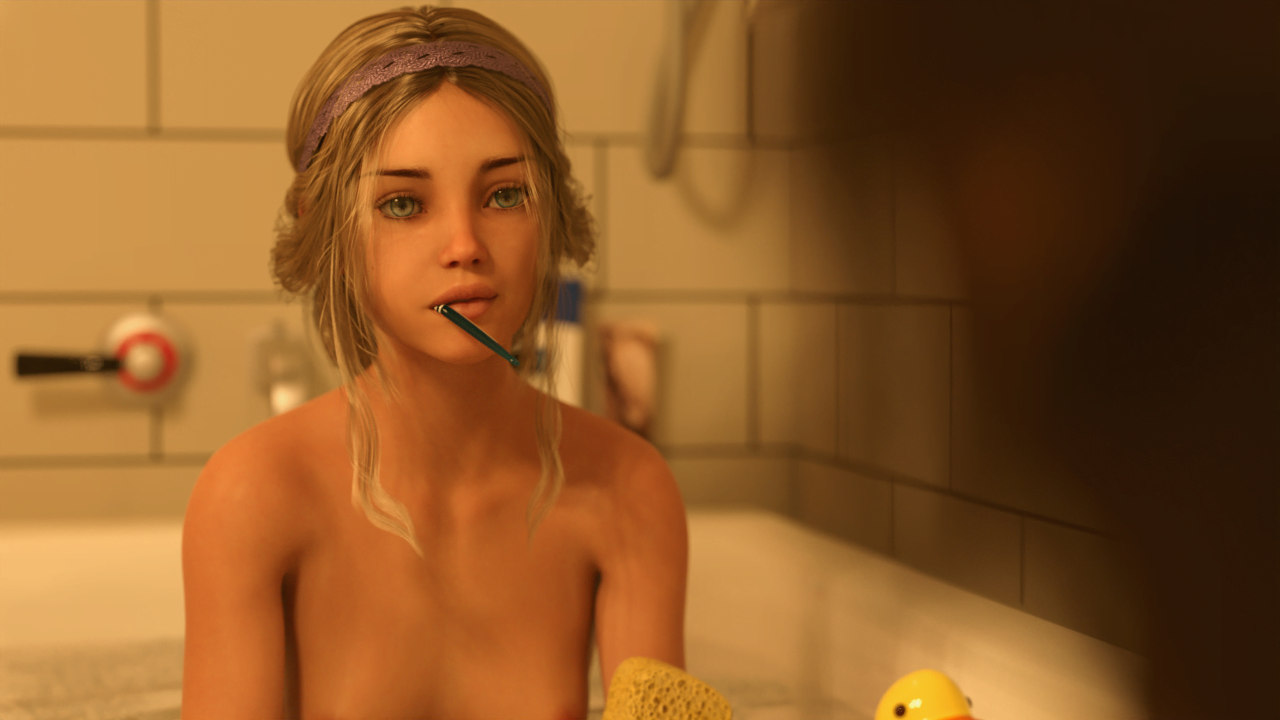