Experience the daily life of a high school student, forced to live with his aunt. Your choices will guide your adventure, some are irrelevant, others are permanent. They will influence your relationship with your family and your classmate. You could become their BFF, or even more… Maybe your different skills will help you achieve your goals. Good luck!

This game was previously known as “School, Love & Cousins”. Due to Patreon’s crackdown on incest, characters are no longer related.

v2.5
– The Populars route. Try to be friends with the most popular guys in high school, but good luck, because they’re fucking jerks! But this will lead you to the downtown gym.
– The gym. Some new events will occurs at the gym, particularly with Mimi (and more in the future). By the way, maybe you could take yoga class with… Triss!
– If you’re popular, maybe you could try to be closer to the cheerleaders. And this will lead you to new events.
– The Virgins! Who are they? Are they’re really virgins? So many questions… But who cares, you just want to bang them too! Two of them will be the stars of this update.
– Now if you have sex with your cousin Alice before sleeping, she will be naked in the morning, and with a new action!
– New lessons for each class.
– New week end activities.


v2.4
– Continuation Hailey event. She wants to be your friend, but why not having fun?
– Continuation of Karly and Christy event, the two lesbian cheerleaders.
– You can now have weekend activities. On the second weekend (or the one if you have an old save), you’ll start doing things at home on Saturday and Sunday afternoon. From there, a new icon will appear to let you spend the afternoon doing things. This will increase the immersion, the lore or sometimes a new kinky scene.
– A new scene with Mimi
– A new scene with Alice
– Massage mode with Hailey

v2.3
– Continuation of the main Twins’ group event. If you like to bang everyone, be careful because it won’t stand secret very long…
– The spa with the twins’ group with massage and sex events.
– The sleepover with the twins is back, with animations.
– Get closer to Hailey, the photographer. Maybe you will change her mind about not having a boyfriend.
– Ako has a new target: Emily. Will you share your girlfriend with her? It could worth it.
– Do you remember what happened between you and Mayo? Well, it’s time to face the consequences.

v2.2
– Continuation of the main Family event. A new rival will appear which can lead to an optional NTR content.
– Continuation of Mimi’s arc. After the rival left, Mimi will be all yours and maybe you’ll finally have sex with her.
– Continuation of Karly and Christy event, the two lesbian cheerleaders. If Karly is a strict lesbian, Christy is more bi, and having a boyfriend seems to miss.
– Continuation of Iris event. Will you let her continue to treat you as a pet? And it’s the occasion to get closer to her friend Mayo.
– Continuation of Ako sub-event: Lisa and Olivia.
– New scene at the spa with Emily.

v2.1
What’s new?
– Continuation of Mimi’s arc. At the end of the previous version, you were starting to get closer to your big cousin, Mimi. Don’t stop right now! You’ll also learn more about her two friends, Axelle and Triss.
– Continuation of Ako’s arc. After all, she’s your best partner. Seduce Lisa and Olivia with her help. In later updates, you’ll have the occasion to include Ako in your existing romances.
– The photo studio is back. If you played the old version, you already know it. It’s not different than before except that there are now animations and new characters will be added as long as you get close to them.
– The cheerleaders. Those sexy bitches… Progress with them and you’ll have two new events available: the first one related to Christy and Karly, the two lesbians. The second one about Iris, who will lead, in the next update, to a new event related to Mayo.
– The baseball scene with Emily, when she’s cheerleading, is back, and with animations.

– The events about the family, the school, Alice’s group, the twins’ group and the beginning of the cheerleaders. These events will be the main events that will lead you to know the game and to other side events involving each characters (that you’ll be free to follow or not)

– The side event about Alice: your cousin. You know each other for a long time and living together will make grow something between you two.

– The beginning of the side event about Mimi: your older cousin. She’s… weird but super sexy. Will you convince her to go further?

– The side event about Emily: the cute blondie. Maybe she will be your first girlfriend, if you like cute, shy and blond girls.

– The beginning of the side event about Ako: Alice’s best friend. Previously your enemy, she won’t be anymore (at least for now). Learn to know her, and you won’t be disappointed.

– The side event about the twins. Yes, they’re twins. Pretty much the same but different, in this first part of the event, you will be particularly close to one of them.

– The side event about Lily: the ginger. Unlike Emily, Lily isn’t shy at all. Will you be her booty-call, it’s a topsy-turvy world!

– The home is fully functional, with a lot of secret relative to the stealth skill.

– The school is fully functional too, with the first part of the lesson, but also some activities to know more about everyone. A new class has been added.

What is different from the previous versions?

– Almost all the renders have been improved!

– A lot of new animations.

– The all story had been changed, to be more realistic and to fit with the high school theme. The cheerleaders are no longer that nice, and the jocks are finally here

– The requirement to see some scenes are shown.

– The quest tracker! Oh yeah! No need to go in the menu to know what to do next.

– All the texts have been made to allow future translations.

– Music, that you can disable or enable easily.

– More saves and three autosaves instead of one.

– The invitation menu to easily track who you invited, when and where. And with the requirements to know what to do.

· All the characters are available to chat at school almost all the time.. Why a remaster? To reduce all the flaws, especially the grinding, and to enhance the story. You have to start from the beginning, but don’t worry, t

· You will do breakfast and dinner only when someone has something to say.

· The same with the bus.

· New icons available to know when an event will occur or if someone wants to talk.

· You can travel to a room directly from the school map.

· New shortcuts to go directly to the lesson or to the cafeteria.

· You can wait on the city map (which is also simplified)

This version contains more than 2500 images, with ¾ new, and 155 animated images. 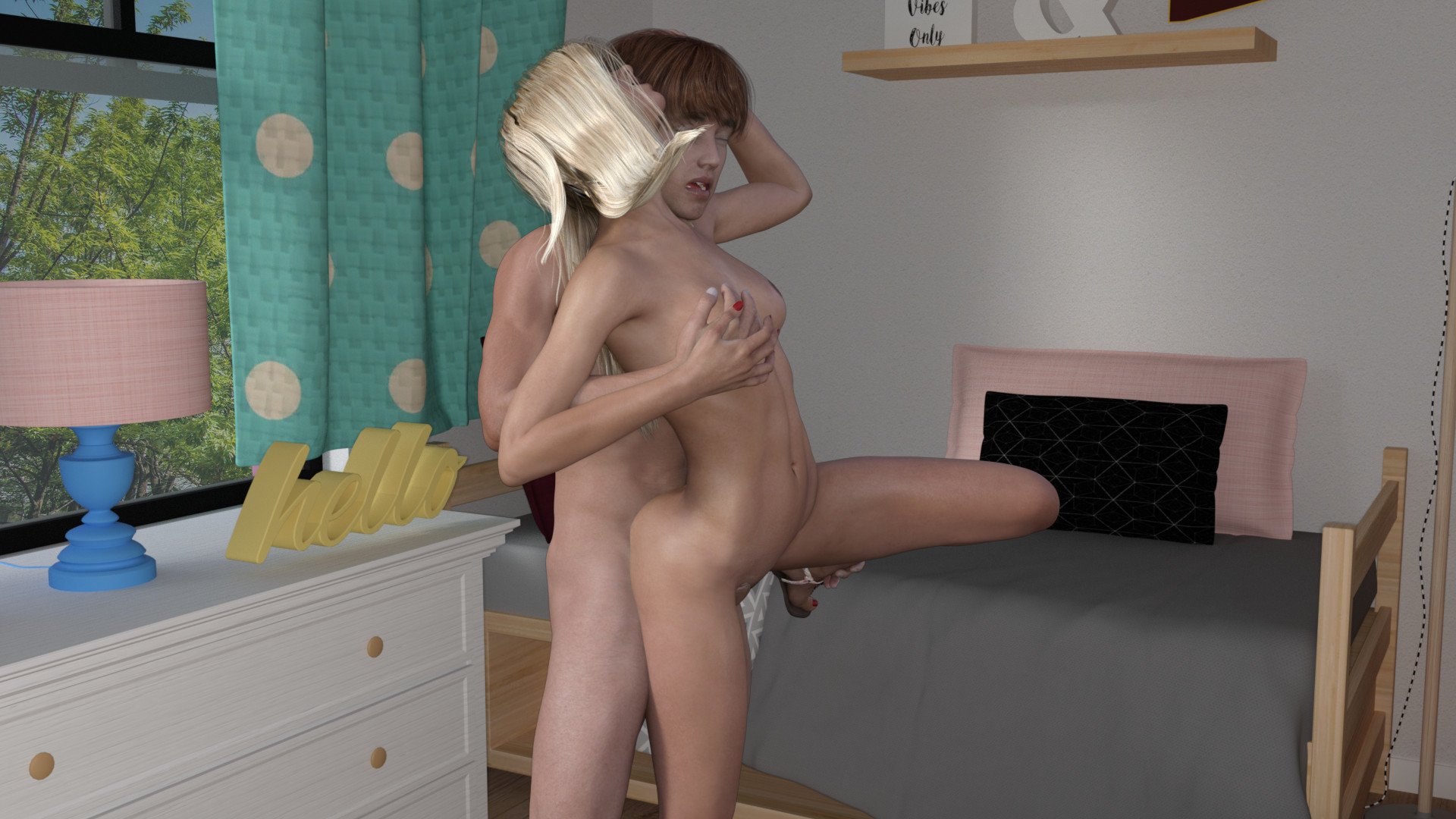