SuperPowered is a RPG game made with Ren’py. In the game, you play as Billy, a young man still living with his mom. At the very beginning of the game, Maggie (his mother) buys Billy his first superpower. Because money is tight, he doesn’t have much of a choice, she’s getting him X-ray vision. Before the process begin, the nurse who’s gonna give him the shot has to test him to see if he’s compatible. As it turns out, he is but there’s something else. Unlike most people, who can only receive a very limited number of those shots, Billy seems to have the uncanny ability to absorb an unlimited amount of them. Thanks to this, he could become the most powerful of them all but in order to achieve this level of power, he must be careful. In a world where almost everyone can buy powers, anyone could be a potential threat.​

What’s New?
Anne’s Nympho Scenes
Anne’s Obsessive Scenes
Anne’s Fetish Scenes
Danni Basic Poses
Danni Basic Interactions
Danni Power Interactions
Globex Psych Evaluation scenes
Sandra’s Critical Success Classroom Scenes (thanks to Patron)
Watching TV with Stephanie Extension (thanks to Patron)
New Positive Alignment Mission (thanks to Patron)
New Reputation Group – Jocks (thanks to Patron)
What’s it Mean?
Anne’s Nympho Scenes: Since Anne starts as this…I’ve reduced the frequency and impact that her scenes have on Billy. Since you know…he’s not to blame for her condition, unlike say…the whole Cheerleader squad. And leaving the negative consequences just seemed abusive. I’ve also tied her scenes to work, rather than “on arrival” since I don’t want to lock a player out from getting injections, or getting first-aid.

Anne’s Obsessive Scenes: For those that know how to manipulate Anne into this state…Don’t expect it to last…This girl has issues 🙁

Danni Basic Interactions: (Self Explanitory-mostly) Stephanie is gonna be a thorn in your side…

Globex Psych Evaluation Scenes: Now when you get a brand new power, Anne will test you for your new flaw as well. Not much gameplay…but adds a lot more flavor.

Sandra’s Critical Success Classroom Scenes: Now Sandra can join the ranks with Allie and Samantha for having specific scenes for when you get a critical success in class.

Watching TV with Stephanie Extension: If you have 10 control over Maggie, and meet some of the other more obvious requirements…there’s a new option for giving Stephanie a massage while you watch TV.

What’s it mean?
The new Jobs have minimum stat requirements as well as an introduction requirement. These Jobs are all intertwined in some ways. And most of em have a lot of variations. The third job is somewhat limited right now as I’d need Maid Manners developed to finish it…but it has a fairly limited window anyway 😉
the new task is a guide on how to get the job at Globex. All you need is an awareness + mental of 7+ and the task will be added to your task list as optional.
Learning your powers scenes have been added to each rank of each power. That’s 29 new scenes…though some scenes are shorter/more involved than others. Still…lost of stuff there if you’re into the lore of the game. Some humerous scenes if you don’t care about lore, and an occasional naughty scene if you can’t read, or refuse to.
I’ve also added an actual scene for when you get first aid assistance, and this scene does change based on certain stats that are determined in the new jobs.
All and all…I made Globex a more solidified location. It has something of identity now, similar to how the school has it’s own kind of identity.
Mary has a few variants of her final Obsessive scene depending on what flaws you’ve unlocked. A new variant starring Terri can be seen if you’ve gotten at least the first rank in MC.
The public ops mission for political canvassing has a new variant with Allie, if she’s been reprogrammed as a personal assistant or sex bot. This scene can only occur on the weekends.

v0.42.00
What’s new?
Anne’s Negative interactions
Anne’s Contact interactions
Anne’s Poly content
Anne’s Corrupted Scenes
A new Positive Alignment Mission: Allie (Additional Content)
A new Reputation Group: Nerds (Additional Content)
A new Drunk Maggie Scene (Additional Content)
A new lunch option with Terri and Stephanie (Additional Content)
A new Mischief Action for the Administration Wing (Additional Content)
What does it mean?
Anne’s new content: Self explanitory.
New Positive Alignment Mission: Allie – Like all other positive alignment missions. You need to ahve done a certain amount of Crimefighting, either through the neighborhood watch, or from school jobs, as well as have an Alignment above 60.
New Reputation Group: Nerds – Like previous positive alignment missions, your reputation within a new group will improve, and give additional bonuses once you complete the positive mission.
New Drunk Maggie Scene – A new Scene for when Maggie comes home drunk. It will only trigger if both her and Stephanie are nymphos.
New Lunch option with Terri and Stephanie – If you have the good brother perk, and Billy and Stephanie are willing to indulge in Terri’s fetish (which must also be unlocked), you can have lunch with both of them for a nice little discussion 😉
New Mischief Action: Ms. Hellens- The last and final administrative mischief action that can be performed on school staff. It has the same requirements as the other mischief actions of the Administrators wing.

That it?
No. Appolm and colin have done some more tweaking in the background. You’ll see some of the tweaks, and some you may not notice

Anne Basic Poses – Self Explanitory
Anne Basic Interactions – Self Explanitory
Anne Power Interactions – Self Explanitory
Anne Phone and Invite Over Scene – This does include a Chelsea Fetish Variant
Anne Professional Favors Scenes – Due to Anne’s Deep Seated Unstable state, These favors may have the occasional hiccup 😉 There are three favors. 1 – ask for Globex influece, 2- Get a free health check up, and 3- Arrange an emergency house call in case you get so banged up you can’t get out of bed.
Updated Phone Layout – Apollom has cleaned up the look of the Phone layout when looking at characters, as well as adding some hotkeys, and new fuctionality. For one you can see how much charm you currently have from any phone profile. You call also cycle through phone contacts(either by using some new arrow buttons, or using the left and right hotkey.
New Phone Action: Browse Bookface – There’s a new button when you pull out your phone that allows you to browse through peoples Bookface posts. Currently there is a boilerplate image (phone profile image) but I’ll eventually make a few unique pictures for each character. What the button actually is is a faster way to spend charm. It randomly pulls characters from your phone and gives you an option to respond to thier posts with a thumbs up, heart, or kiss. These buttons operate just like texting, flirting, and sexting and everytime you respond, it immediately pulls another profile, until your run out of charm, or back out of Bookface. Also thanks to Apollom.
Some Tweaking made to X-ray Vision – Self explanitory. You should get more energy from xray vision now, though you may lose a little more willpower as well.
Minor fixes to Sandra’s fetish outfit – Some poses were missing. Now they are not.
Some new options for Sandra’s basic MC scenes (additional content) – While I was fixing Sandra’s missing images, I decided to add a little extra something I had wanted to add when I first implimented Sandra’s Fetish.
New Sandra Invite Over Variant (additional content) – I’ve had this in my to do list for a while, but I had misplaced the render files for this scene. Luckily I found them, and now there is a boobjob variant to Sandra Invite Over scene.
Billy Jean, Derek, and Freddy Videogame Scene Variant (additional content) – Pretty self explanitory, though I will say. You only need Polymorph: Gender Shift 1 to get this ….um…team building exercise…as an option.
That’s it?
Yep. As usual, characters are broken into three sections. The next SP update will focus on Anne’s Contact interactions, Negative Interactions, and Corruption Scenes. The update after that, I’ll start sprucing up Globex, and possibly adding a new Globex job 😮

for multiple cheat use
x = the number value you want

call adv_time​
advance the time (can reset the time to morning)​ 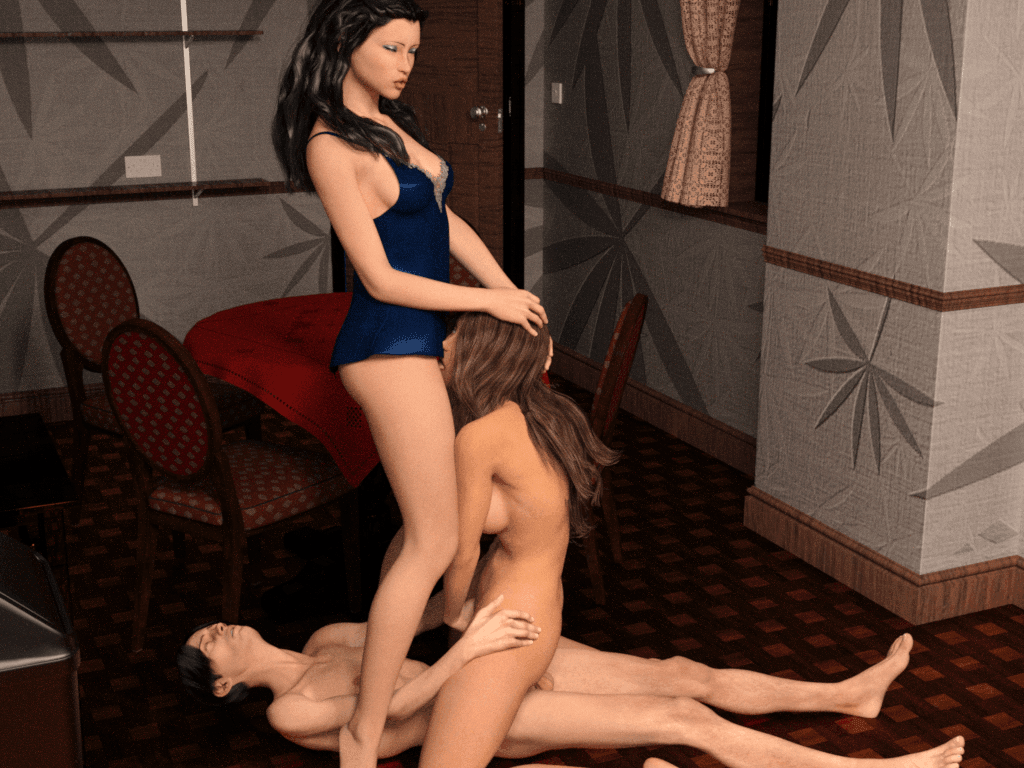