Now & Then is a story of Jack (or a name of your choosing) Brooks, a widower who lives with his adopted teenage daughter, Carol, during the aftermath of a global pandemic. Throughout the story, players witness the string of events that finds Jack adopting Carol and how they grow into a family unit before the collapse of civilized society. Inspired by Stephen King’s The Stand and numerous zombie movies and books, Now & Then is a tale of survivors learning to cope with life as it comes to them.

While the present is filled with tense moments as the Brooks family struggles with challenges of the new normal, including bandits, the infected, and their own dwindling supplies, memories of the past provide a slice-of-life window as Jack tries to learn how to be a new father to a teenage girl.

v0.22.0
Added Chapter 22
Fixed minor typos
Fixed an audio bug where the shower noise may not turn off after showering alone
Fixed some corrupted image data in Chapter 18 of the Android version


v0.21.0
Added Chapter 21
Fixed minor typos
Fixed the animation with Alice in the bedroom in Ch20
Reshot some earlier sequences to clean up transitions
Added alt scenes and code for unlocks

v0.20.0
Added Chapter 20
Fixed minor typos
Fixed an image in CH19 with scale issue
Probably some other stuff but since I lost my notes when my previous computer died, I can’t recall everything.

v0.14.0
Added Chapter Fourteen
Fixed minor grammatical errors/typos
Fixed name tag on a scene in Chapter 13 where Naomi is listed as Carol
Fixed a if/else statement in Ch13 that might show both lines rather than one in the conversation between Naomi and Sydney about the MC’s availability.

v0.13.1
Re-built distributions in an older build of Ren’py to hopefully address issues with some users being unable to run the game
Minor name fix in a scene where Naomi/Carol comes to Jack’s bed and Naomi is named Carol for the whole scene.

v0.13.0
Added Chapter 13
Minor typo/grammar fixes
Fix a hole in the code where you could continue playing the game from the gallery version of scenes with choices mid-scene.

v0.12.0
Added Chapter Twelve
Fixed minor grammatical errors/typos
Fix some minor issues in Chapter 6 with background elements in scene 12
Updated a few shots on the school rooftop due to a change in the background scenery

v0.10.0
Added Chapter Ten
Fixed a naming tag that had Ted listed as “Television”.
Fixed a missing tag in the Halloween Special where players might not punch Rodney.
Fixed the flag location to unlock the drunken kissing scene with Carol to after something actually happens.
Added code for Unlockable Alt Scenes

Added Chapter Eight
Change the format of text to improve legibility. Added drop shadow to light text. Added thin outline to red name text. Changed the color to hyperlink text.
Based on feedback, edited an animation from Chapter Three to remove some glitchy frames
Minor grammar edits to previous content
Due to user feedback, fixed a line at the end of Chapter 7 that is attributed to Carol rather than Naomi.

v0.06.0
Added Chapter Six
Based on feedback, altered scene with Carol drinking scotch for the first time to make her reaction a little more plausible.
Fixed minor typos in Chapter Five.
Reworked animations to address an issue where animated scenes play poorly in the Android version of the game.

v0.05.0
Added Chapter Five
Fixed a visual glitch in Gallery where “Locked” tag won’t display on one of the Replay Scenes
Tweaked lighting in a few scenes where the renders were too dark to see clearly

v0.02.1
Fixed some tags for MC in Chapter Two
v0.02.0
Added Chapter Two
Made minor tweaks, including spelling and grammar edits, in a few scenes in Chapter One that do not impact the story
Added new music and sound effects; restructed music library
Updated Exit Screen with Twitter and Patreon info
Updated formatting of credited audio, mods, and photography under About
Rework GUI graphics for confirmation screen 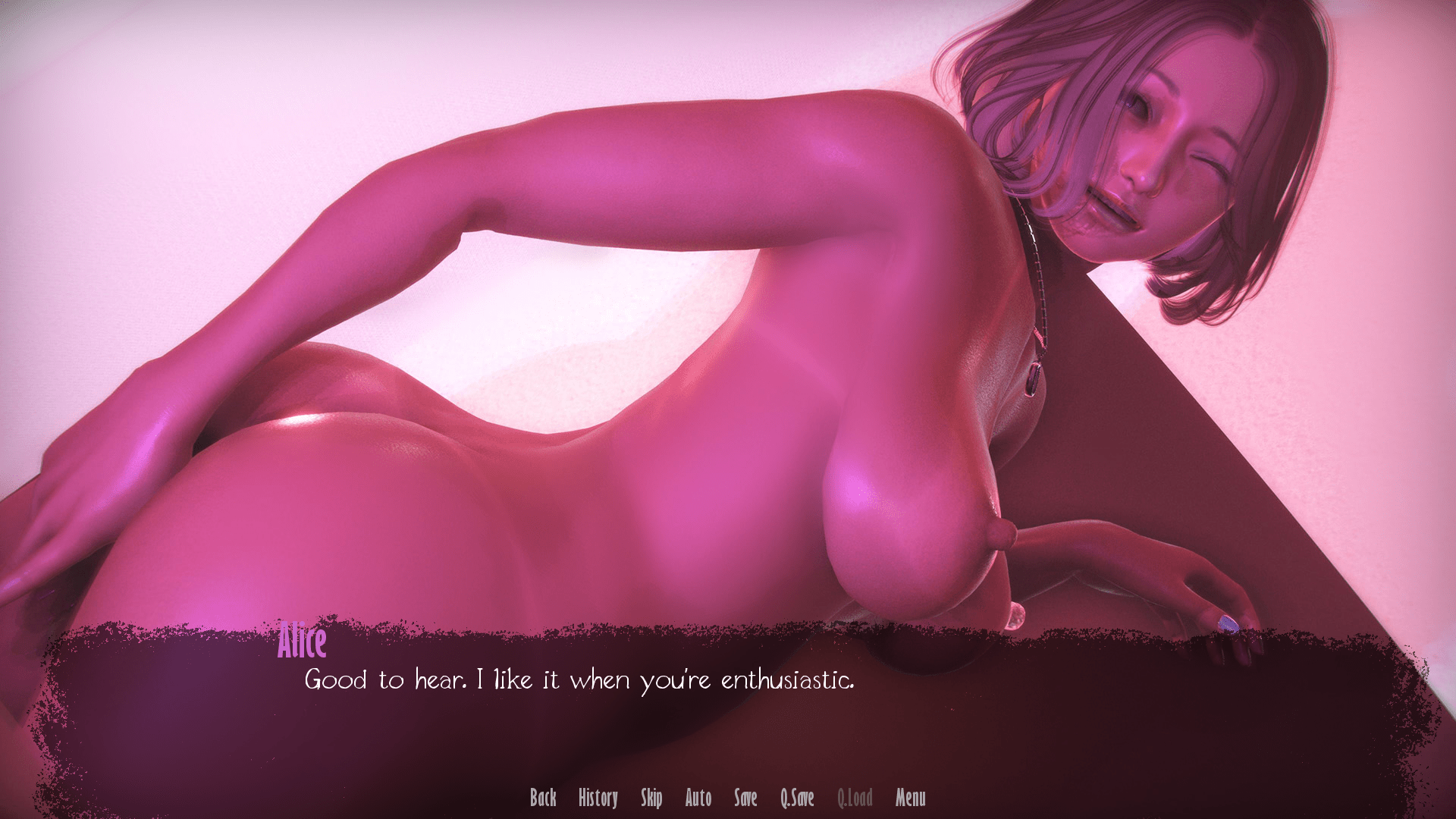