Connor is spending his young adult life carelessly, having easy access to money and pleasure.
However, after a failed year at college, his life starts to fall apart as he returns home to face the consequences and those he left behind 2 years ago. He’s met with an ultimatum: rise up to the challenges and show he’s capable or watch his future taken from him.​

v0.14 Elite
This update focused heavily on advancing the main story and Celine.


– Added an auto-forward button that can be turned on or off in the settings menu
– Added page number buttons to the gallery so it’s easier to switch pages
– The game can now detect when its around Halloween or Christmas time and might show some holiday themed stuffs
– Added an option in the settings menu to disable the custom mouse cursor
– Fixed 102 typos, and future releases shouldn’t have typos anymore
– Made a lot of UI improvements
– Increased the size of the old event trigger and booty call icons so they’re more noticeable
– Lowered the volume of the main menu music so it’s no longer super loud

v0.6 – Game Remake Update
Old saves are not compatible in this new update. New saves made in the current update will always be compatible with future updates.
However, you do NOT need to restart from the beginning of the game if you do not want to.
When you start a new game you have the option to start at the update you last finished,
and have every choice/decision in the game exactly as you had it before (or change them if you want),
and have all scenes you had watched unlocked in the new gallery.

– Night Scenes now unlock as you play. This creates better progression with the lewd content in the game. (This is especially relevant if you’re playing for the first time)
– Added some miscellaneous dialogue like the Logan-Connor insult interaction and the portrait monologues.
– More involvement of the Morality System – this will be the first time your past decisions influence a choice you can make in one of the scenes
We start slow with this, but later there will be bigger choices/routes that depend on Connor’s Morality

– Midnight Paradise is now available on Android and Chromebook! The apk is playable on old and new Android devices and Chromebook
– Added 13 new locations to the game!
– Home: bedroom hallway, side corridor, bathroom interior, Isabel’s room interior, Joyce’s room interior, Ruby’s room interior
– School: entrance, lecture hall, library
– City map: boutique, Ms. Jane’s home, Sofia’s home, Thorne’s office interior
– Removed the old room navigation system and added a new one which allows you to click and move around the house and other locations more naturally
– Added character schedules for all characters; characters can now be seen and interacted with in different places depending on the time of day and other conditions
– Rewrote all of the code in the entire game, which has resulted in improvements in quality for every aspect of the game

Improvements:
– Improved the flow of story progression by removing many gratuitous event trigger requirements
– Completely remade the scene gallery; improved the design and navigation, the gallery is now sorted by character, all scenes that were missing have now been added, thumbnails are higher resolution, and scenes that are new in the latest update are now highlighted so you can easily find which scenes are new
– Improved all scene replay transitions and the starting points of many scene gallery scenes
– Increased the quality of 54 animations by about 20% by re-encoding them in a better way
– New yoga scenes for Joyce are now triggered from her bedroom in the morning to keep consistency with the actual scenes
– Improved the beginning of every massage event for all characters
– Increasing a character’s massage or yoga level will no longer cause you to miss a scene if you haven’t seen the scene for that character’s current level
– All levels of massage, yoga, and tutoring events can now be repeated
– New massage, yoga, tutoring, and tv events will now show that they’re new so you don’t have to repeat an event to see if it’s new
– You can now exit from talking to Joyce, Isabel, or Ruby instead of being forced to replay a scene if you clicked them
– Ms. Jane now teaches class in the morning, and will also occasionally offer to start a tutoring session after class
– Implemented day of the week system, which for example means Ms. Jane won’t teach class on the weekend
– Improved many events by adjusting the event trigger location and time as well as the event ending location and time to match the beginning and ending of the actual scenes
– The Skip Time button is now able to trigger new events at a location (previously it was unable to due to limitations in the old navigation system made by the previous programmer)
– Improved the city map screen; the map button now toggles the map screen, the toolbar is now visible on the map screen, location labels are now always visible and look a bit better, and locations will now only show if they can be visited
– Restored some dialogue to Joyce’s second massage event
– Improved every cum scene sequence for all scenes
– Improved unfitting dialogue lines and corrected many typos and grammar issues for every event in the game
– Improved enter and exit scene transitions for nearly every event in the game
– Improved the image quality of all location background images
– Improved the pause for all text-based story transitions
– Improved the choice screen menu by adding the option to show disabled choices
– The Objectives screen now shows which massage and yoga scenes you’ve watched instead of your current level
– Reorganized the game’s entire file, image, and code structure, which makes coding implementation of future content faster

v0.4.2
– Fixed an image not scrolling properly in Ruby’s dressup scene
– Fixed Joyce’s objective screen so her last objective will now say it is complete if you finished her last story event
– Fixed a bug where if events were done in a specific order on saves from before 0.3.1 Joyce’s yoga and massage level wouldn’t be set to max.
If you were affected by this bug go to the basement at any time after you’ve finished the nightclub event and the levels will be fixed.
– The nightclub music will now end when you leave the nightclub
– Leaving the nightclub will no longer set the game to morning

v0.4.1
Not for you to know until tomorrow

v0.4.0
– Implemented Objective System
Clickingthe the Objectives button in the top bar now displays active objectives
with descriptions and hints to the player on what should they do next to progress
the storylines of the characters.

– Skipping time past Night is no longer possible, instead you have to go to Connor’s room
(basement) and click on the bed to sleep and advance time to morning.
This triggers scenes that activates in the morning without having to re-enter the basement.

v0.3.1
– Fixed Isabel’s massage event, now it unlocks after her new story scene in her room
– Fixed not being able to access level 3 of massage or yoga of characters when viewing scenes in a particular order
– Fixed getting stuck on “Nobody is here” after entering Ruby’s room on day 7
– Fixed and added some new scene unlock notifications
– Fixed an issue where some images in the game were their unedited versions (contained artifacting)

v0.3
– Added option to change text size in the Preferences menu
– Added notifications with hints when unlocking new scenes
– Added music and some sound effects
– Added Scene Replay function – accessible from the main menu under the extras sub-menu
– Extra and Elite scenes are now only viewable from the Extras menu and are unlocked by progressing in the game
– Added Help section to see key bindings
– Edited dialogue for a LOT of scenes
– Wrote slightly different dialogue for the second drinking scene
– Wrote alternate dialogue for all of the repeatable scenes
– Alternate dialogue will occur when not viewving the scene for the first time
– Added a cutscene after visiting Thorne’s office for the first time
– Added Yoga level 2 and 3
– Added Mrs Harding massage level 3
– Added Isabel massage level 3
– Added Tutoring level 3 and level 4 with 4 options and a new reward
– Added new 2 story scenes with Thorne
– Added new story scene with Isabel
– Added new story scene with Mrs Harding
– Fixed a ton of bugs
– And a lot more stuff, some of them minor and some bigger
– (New extra and elite scenes)
– (2 Elite bonus animations with legacy character)

To open the mod menu after you’ve installed the mod, click the Phone icon on the toolbar at the top of the screen when you’re in-game.

PC:
Unzip the mod and put the folder named “game” from the mod into your “MidnightParadise-0.14-pc” folder. 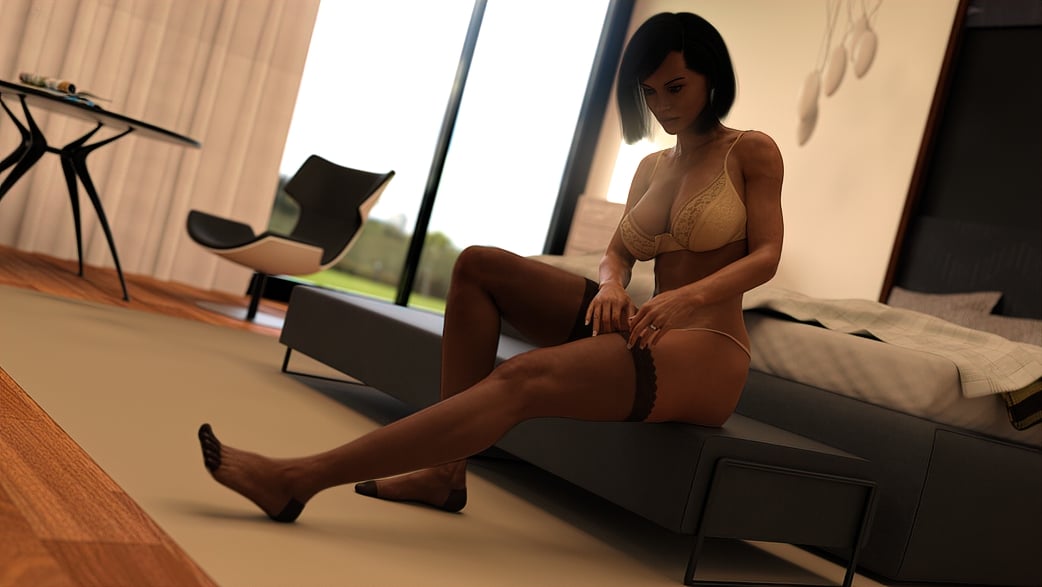